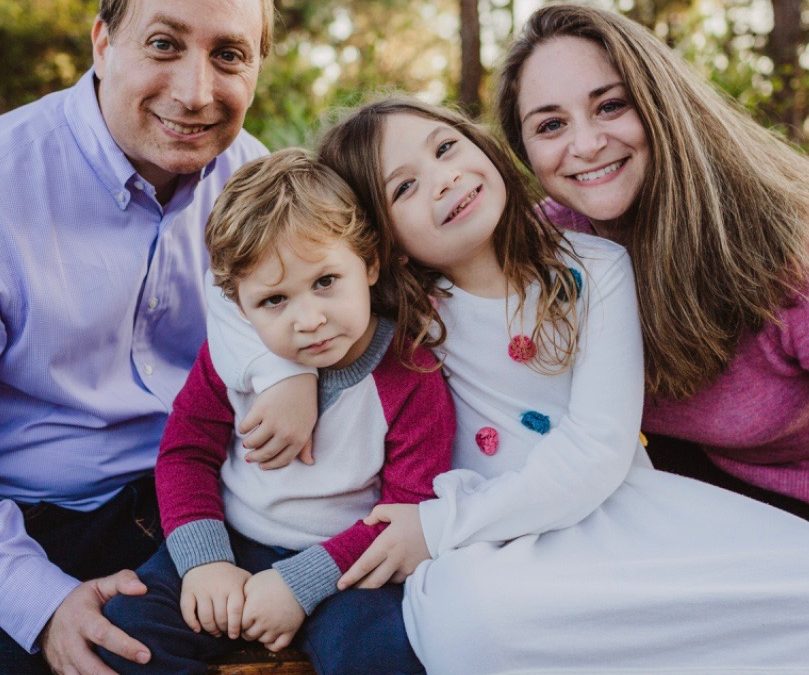 Up until his first birthday, Jordan Ogman had been hitting all the typical milestones. But shortly after blowing out the candles on his first birthday cake, his parents Stacey and David Ogman felt in their hearts there was something wrong.

“While he didn’t regress, Jordan was moving at a much slower pace than this peers and without the same strength and ease that our daughter, Jordan’s older sister, Kira, had progressed with,” Stacey said. “We immediately began early intervention services such as physical therapy, occupational therapy, developmental and speech therapy.”

After many months of questions and concerns, Jordan’s family finally received a diagnosis on Sept. 17, 2019.

At age 4 years old, Jordan was diagnosed with TECPR2, a fatal, neurodegenerative, debilitating, genetic disease that seemingly disproportionately affects Ashkenazi Jews. He struggles throughout the day to walk without constantly falling, to process information and has limited ability to speak.

“We immediately went to Boston to confirm the diagnosis and to meet with neurogeneticists, neurobiologists and critical care physicians,” Stacey said. “We were given devastating news that our son is dying and there is no available treatment or cure at this time for TECPR2.”

Determined to save Jordan, The Ogman family has since formed The Jordan Avi Ogman Foundation to garner awareness and funds for a treatment and cure for TECPR2. Their goal is to raise $2.5 million dollars immediately so the University of Florida’s Powell Gene Therapy Center can complete their research and pursue the plan of action for a treatment/cure.

This research would not only save Jordan’s life but it would benefit other children battling TECPR2, as well as potentially lead to lifesaving breakthroughs for other neurodegenerative diseases of the brain.

“We know that TECPR2 is a fatal neurodegenerative disease” Stacey said. “But Jordan’s life is not a tragedy. He is a warrior. He’s resilient and bright and we’re fighting every minute to save his life.”

While the Ogman’s are literally working 24/7 to find a cure for TECPR2, its Jordan’s drive that keeps them going. “The determination and willpower he has at 4 years old keeps us motivated,” David said. “We stay strong for each other. And I want Jordan to never give up because we’re not giving up.”

Both University of Florida graduates, Stacey and David never imagined they’d be returning to their alma mater seeking a lifesaving cure for their son. In the meantime, the Ogman family is doing all they can to keep Jordan’s life as happy and normal as possible between therapy appointments and playtime with his big sister, who cannot fathom life without her little brother.

“I love being a big sister to Jordy and I want him to last forever,” Kira said.

The Ogman family was also honored for Jordan to have a special initiation into Alpha Epsilon Pi Fraternity. His father is a longtime member of the Jewish frat and it was very important to the family that Jordan receive the chance to join.

“When he says ‘Nana,’ my heart just melts,” said Lisa Kenny, Jordan’s paternal grandmother. “He’s my only grandson, my only prince. He’s a happy, excited child and we have to find a cure.”

On Feb. 20, from 7 to 10 p.m., PRIME Red Meat Lover’s Club is hosting an event “Meaningful Meeting” for Jordan at Museum 66, 2051 High Ridge Road in Boynton Beach. It will be a night of steaks, music, pinball, cigars, auction, bourbon and classic cars. rmlcforjordan.com  https://www.eventbrite.com/e/red-meat-lovers-presents-a-meaningful-meating-for-one-of-our-own-tickets-86954181297?utm-medium=discovery&utm-campaign=social&utm-content=attendeeshare&aff=escb&utm-source=cp&utm-term=listing

On March 15, at 11 a.m. at the Broward Center for the Performing Arts Sweetness & Laughter Gala, The See the Light Awards Ceremony. It will be an afternoon celebrating progress and personal heroics complete with a sumptuous brunch and “Mean Girls” Broadway Show. mfrfoundation.org